The U.N. children's agency on Tuesday urged Tamil Tiger rebels to stop their alleged recruitment of child soldiers and said the issue should be prominent when the government and the rebels meet for peace talks in Geneva later this month. UNICEF in a statement urged the two sides to "ensure that the protection of children affected by the conflict is at the center of upcoming talks." 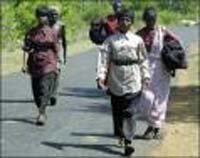 "Of particular importance remains the unresolved situation of child recruitment, which led UNICEF to yet again appeal to Liberation Tigers of Tamil Eelam to cease the recruitment of children and to release all children within its ranks," the agency said. The government and the rebels are scheduled to meet in Geneva, Switzerland on Feb. 22-23 to discuss how save a four-year-old cease-fire that is under threat due to regular violence.

While cases of child recruitment have declined in the past six months, only a few children have been returned to their families by the Tamil Tigers, as previously agreed with UNICEF, the statement quoted JoAnna VanGerpen, the agency's Sri Lanka representative as saying.

"While recruitment of children has been reduced, and the average age of recruitment has increased from 14 to 16 over the past four years, recruitment of even one child is unacceptable according to the Convention of the Rights of the Child," she said.

The UNICEF has said that 5,368 child recruitment cases have been reported since 2002, the year when the government and the Tigers agreed to a Norway-brokered cease-fire. One year later the Tigers agreed with the UNICEF and the Sri Lankan government to release all child soldiers to a rehabilitation center, where they were to be given counseling and vocational training to help them re-enter society.

Tamil Tiger rebels began fighting the government in 1983 demanding a separate homeland for the island's minority Tamils accusing the majority Sinhala-dominated state of discrimination. About 65,000 people were killed in the conflict before the cease-fire. Peace talks broke down in 2003 when the rebels withdrew demanding more autonomy to the Tamil-majority northeast, reports the AP.