French Prime Minister Dominique de Villepin said Tuesday that France and Russia must demonstrate solidarity in international affairs, according to Russian news reports. "Today like never before, France and Russia must speak in the international arena with one voice," Villepin was quoted as saying by the ITAR-Tass news agency at a French Embassy ceremony honoring World War II airmen. 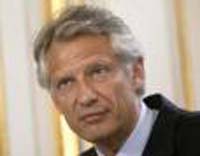 "In the face of the challenges that the contemporary world throws our way, terrorism, the spread of weapons of mass destruction, regional crises including, in particular, in the Middle East, our countries are capable of acting together, uniting their forces and carrying high our common ideals, bravery, tolerance and solidarity," ITAR-Tass quoted him as saying.

Economic ties and energy cooperation were expected to dominate Villepin's talks with his Russian counterpart Mikhail Fradkov, while Russia's efforts to negotiate with Iran and Hamas were likely to be the main focus of his meeting with President Vladimir Putin.

Hours before Villepin arrived in the Russian capital Monday, Tehran abruptly postponed talks scheduled for this week on Moscow's offer to shift Iran's uranium enrichment activities to Russian territory. Israel and other countries have criticized Putin's invitation to Hamas leaders to visit Moscow, but France has cautiously supported it. Russian officials have said they would press the Palestinian militant group to recognize Israel and give up violence.

Fradkov said economic ties between the Russia and France were growing dynamically, with the trade turnover increasing by 25 percent to 30 percent every year, the RIA-Novosti news agency reported. The two countries' trade reached US$9 billion ( Ђ 7.5 billion) last year, he said.

Villepin and Fradkov were due to sign agreements on mutual protection of intellectual property in the weapons sector, cooperation in liquidating chemical weapons stocks, French training of Russian economic managers and nuclear energy cooperation within the framework of the Group of Eight, the ITAR-Tass news agency reported, reports the AP.