British government revolts against partial ban on smoking in clubs

British lawmakers vote Tuesday on anti-smoking legislation amid a smoldering dispute over whether to allow a partial ban or to stub out smoking altogether in pubs, restaurants and clubs. The government has allowed its lawmakers to vote their conscience on the issue, rather than the party line, following widespread criticism of its plans to exempt private clubs as well as pubs that do not serve food. 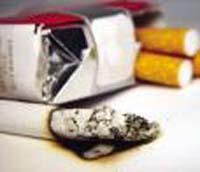 British government revolts against partial ban on smoking in clubs

Lawmakers will consider three options: an outright ban, a partial ban that doesn't cover pubs that don't serve food or an exemption from the ban for private clubs. Lawmakers, health charities and the leisure industry have expressed concern about a partial ban because of the exemptions. Critics say it is confusing and inconsistent to allow people to continue to smoke in some locales but not others.

The debate has split Prime Minister Tony Blair's Cabinet, and several lawmakers from his own Labour Party have offered an amendment to the Health Bill calling for a total ban. Health Secretary Patricia Hewitt, who favors a smoking ban in all public places, said she would vote for an exemption for private clubs.

"The arguments on this issue of the private membership clubs are genuinely finely balanced because what we are trying to do is balance, on one hand, protecting people from harm and, on the other hand, people's individual freedoms," she said in an interview with British Broadcasting Corp. radio.

But Labour legislator John Grogan said he was confident that the Commons would extend the ban to private clubs. "All other laws apply across licensed premises," he said. "No one would suggest the minimum wage or health and safety legislation should not apply to clubs."

When it announced the vote last month, Blair's office acknowledged that the "momentum of the public mood was going toward a complete ban." Health officials say around 114,000 people die each year from smoking-related illnesses in Britain.

A total ban would be "the single most effective thing members of Parliament could do to cut lung cancer deaths," said Peter Cardy, chief executive of the Macmillan Cancer Relief charity. But the British Beer and Pub Association, which represents around 60 percent of the 53,000 pubs in England and Wales, some 80 percent of which serve food, said the ban is "grossly unfair" to pubs trying to compete with England's 22,000 private clubs.

Smokers said the ban would drive them out of their favorite watering holes. "I consider myself a fairly considerate smoker" who would not blow smoke over diners, said Josh Swainson, owner of a London wine store. "Many places have nonsmoking areas for people, which I think helps", reports the AP.