European Commission President Jose Manuel Barroso expressed support for Denmark in the dispute over the Prophet Muhammad cartoons, saying in comments published Tuesday that freedom of speech cannot be compromised. In an interview with Jyllands-Posten, the Danish paper that first published the drawings, Barroso insisted that freedom of speech is a "fundamental value" in Europe and said "it's better to publish too much than not to have freedom." 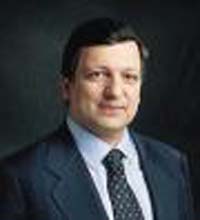 It was the first time the commission chief spoke out directly on the crisis that has escalated into massive street protests in Muslim countries after Jyllands-Posten refused to apologize for printing the drawings in September. "Denmark is a country that we respect and that has a long tradition of being an open, tolerant and a free country, and a country known for good dialogue with different civilizations and cultures, and which at the same time is one of Europe's largest contributors when it comes to development aid," Barroso was quoted as saying in comments translated into Danish.

Barroso expressed the European Commission's full solidarity with Denmark and said he was "upset" by TV pictures showing angry mobs burning Danish flags. "Nothing justifies violence and we must tell those who do not like the drawings that the freedom of speech is not up for negotiation. It is a fundamental value in our open European society," he was quoted as saying.

"I can understand that the drawings have offended many Muslims around the world, but that does not justify violence." Islam widely holds that representations of Muhammad are banned for fear they could lead to idolatry.

Barroso said he has been in contact with Danish Prime Minister Anders Fogh Rasmussen since the onset of the uproar, and had no reason to question the Danish government's handling of the crisis. The Danish government has resisted pressure to accept any responsibility for the cartoons, one of which depicts the prophet wearing a turban shaped like a bomb, saying it has no say over the media. The drawings have been reprinted in many European media.

"My message to the Danes is that they shall handle the situation with stoic calm and understand that times have changed, and that we shall try to turn these difficult times for Denmark and Europe to our advantage," Barroso said, reports the AP.