Chocolate, as only Italians do it

Of all the history and culture created in Italy, of all the legendary writers from Cicero to Dante, there is one edible product that stands tall among them. Cioccolato. Chocolate. And for chocoholics, there are no 12-step meetings here. Just long roads chocked with temptations to fall off the wagon, and enough varieties to fuel a lifetime bender. 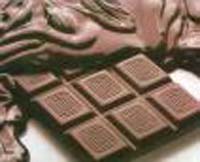 Chocolate, as only Italians do it

As the Turin Olympics slogan says, "Passion Lives Here," and people here are as passionate about chocolate as they are about love, perhaps even more so, in a very different way. "Chocolate is definitely better," said Maria Teresa Ferrero. "It gives less problems and it's always there."

Ferrero owns Abrate, a chocolate-and-pastry shop that opened in 1866 and was operated by the Abrate family until four years ago, when it was put up for sale. Ferrero proudly points to the original marble countertops, walnut paneling and brick and cobblestone floors.

Despite all the talk about chocolate being the taste of love, Ferrero laughs when asked to compare the two. "It's different," she says. "Love invades your mind. When you're in love, it's the only thing that's on your mind. "Chocolate," she says, "doesn't take over your life." Perhaps that is better for business.

And an interesting sentiment on Valentine's Day, but Ferrero says Italians give each other more than chocolate on Feb. 14. An example? "Jewelry," she says with a smile.

Besides Valentine's Day, there is another incentive for extra business here. In honor of the Winter Games, city officials have introduced the ChocoPass. Available in Ђ 10, Ђ 15 and Ђ 20 installments, the cards entitle visitors to eat their way through a large array of chocolate tastings available across the city. It's an inexpensive entrance to a world of delight once considered good enough only for royalty.

To make the point that everyone was entitled to celebrate, Emanuele Filiberto of Savoy, whose family long ruled this region, served the entire city steaming cups of chocolate in 1560 to toast Turin's newly acquired designation as the capital of his kingdom. The honor previously belonged to Chambery, France.

Under another occupier Napoleon the notion of mixing hazelnuts, indigenous to the Piedmont region, took hold. Because chocolate during wartime was too expensive, the hazelnuts (also known as filbert nuts) were ground into paste and added as filler. From that came gianduiotti, the most famous of chocolates from Turin.

Other delights: pralines, or chocolate truffles. Fillings of cream are rolled in chocolate and dusted with cocoa powder. Or hazelnuts. Or powdered sugar. Chocolate is also added to coffee, to liquor and to milk. "We put chocolate everywhere," said Ferrero.

At the back of her shop, Chiara Biagioni shared a table and a chocolate croissant with her friend Francesco Vanni, who was drinking a bicerin, a local specialty of chocolate, coffee and whipped cream. "It puts you in a good mood, especially the gianduiotti: they melt in your mouth and make you forget all your problems," said Biagioni. As for Valentine's Day, Vanni said he and Biagioni don't need to buy chocolate. "We buy them all the time and always have some at home," he said. But for Biagioni there definitely is a connection between chocolate and love. "It's always better to eat it with someone ... to share the moment, to look into each other's eyes and say 'Madonna! It's so good!", reports the AP.