Police fired tear gas Tuesday as they chased away more than 1,000 protesters, some brandishing sticks and throwing stones, who stormed into the heavily guarded diplomatic enclave in Pakistan's capital, demonstrating against the Prophet Muhammad cartoons. The crowd, which briefly rallied outside the French and British embassies, entered the enclave through the main gate, guarded by about a dozen police who didn't resist the mob of mostly students. 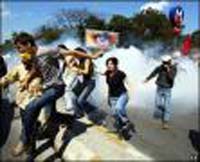 Once inside the fenced-off enclave, they charged about a half kilometer (half mile) down the road to the British High Commission, or embassy, where police dispersed them with tear gas. They also gathered outside the French Embassy.

Some of the stick-wielding protesters damaged road signs and broke a bank's window in the enclave, which houses most of the embassies and some residential compounds for diplomats in Islamabad. The crowded totaled between 1,000 and 1,500 people. U.S. and British embassy staffers were confined to their compounds until police quickly expelled the protesters from the enclave.

"We heard there were some protesters who entered the diplomatic enclave and for security reasons we were advised not to leave the High Commission," said a British Embassy official. Outside the enclave, the protesters smashed street lights and burned tires while chanting "Death to America" and other slogans. Police rounded up about 50 protesters and put them in pickup trucks.

Another protest in Islamabad drew about 4,000 people. The rally was organized by lawmakers. People in the conservative Muslim nation have been enraged by the publication of the cartoons, which first appeared in a Danish newspaper in September. Papers in other countries, mostly in Europe, reprinted them. One of the caricatures depicts Muhammad wearing a turban shaped as a bomb with an ignited detonator string.

There have been a series of mostly peaceful protests across Pakistan against the cartoons, and last week Parliament adopted resolutions condemning the drawing. On Monday, about 7,000 protested against the cartoons in the northwestern city of Peshawar, smashing windows at universities with stones and police fired tear gas and swung batons to stop them from marching on the residence of the provincial governor.

In the eastern city of Lahore, about 70 percent of the shops and other businesses were closed Tuesday for a protest against the cartoons. Security was tight as dozens of religious groups planned to march later Tuesday, reports the AP.