Ukraine and Russia began consultations Tuesday over the presence of Russia's Black Sea Fleet in a Ukrainian port, amid complaints from Kiev that the Russian navy is paying too little and taking over lighthouses that belong to Ukraine. The talks are being held under the auspices of a new joint presidential commission set up to deal with the thorny disputes that frequently arise between the two ex-Soviet neighbors. 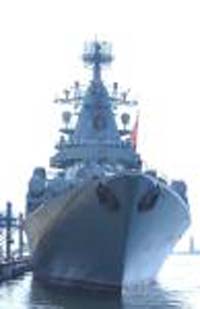 After years of bitter argument, Russia and Ukraine signed a 1997 agreement on the division of the Soviet Black Sea Fleet that allowed the Russian navy to remain in the Crimean port of Sevastopol until 2017. Under the agreement, Russia paid an annual rent of US$93 million ( Ђ 77 million).

Ukrainians have suggested recently that the price should mirror real market conditions, warning it could increase by up to 20 times to US$1.8 billion ( Ђ 1.5 billion). Kiev has also demanded that Russia surrender lighthouses and other property along the Crimean coast that Ukraine claims were not part of the Black Sea Fleet agreement; Moscow has accused Ukraine of trying to seize the lighthouses and warned that it would defend Black Sea Fleet property.

The latest sparring came after a furious dispute between the neighbors over gas prices earlier this year that resulted in a nearly twofold increase in prices for Ukraine. One of Russia's main arguments was that there was no reason for it to continue to subsidize the Ukrainian economy and that the time was right to start charging market prices. The Ukrainians are now attempting to use the same argument over the Black Sea Fleet, while Russia demands that the earlier agreement over prices remain in force.

"Ukraine has a unique chance to move our bilateral relations with Russia into a wholly new level of development, beginning with mutual respect, the strict observance of existing agreements and taking into account the interest of both nations," President Viktor Yushchenko said on the eve of the talks. Ties between Moscow and Kiev have been increasingly tense under the pro-Western Yushchenko, who has tried to shake off Russian influence since coming to power early last year, reports the AP.