Thousands people in Beirut to mark anniversary of Hariri assassination

Thousands of Lebanese waving flags massed in a central Beirut square Tuesday to commemorate the first anniversary of the assassination of former Premier Rafik Hariri, answering a call by anti-Syrian groups seeking to show their popular strength amid deep political divisions. Thousands of troops and policemen, backed by armored vehicles, sealed off Beirut's downtown area to provide security and guarded approaches to the Lebanese capital, where organizers were hoping that hundreds of thousands would participate in a show of unity. 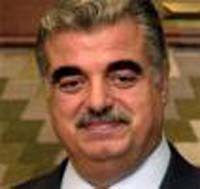 Thousands people in Beirut to mark anniversary of Hariri assassination

The government gave schools the day off and businesses shuttered to give way for people to participate. Thousands began gathering in the morning under in crisp cool winter weather under sunny skies, carrying Lebanese flags and pictures of Hariri. The demonstration, described as a "gathering of loyalty and national unity" on the central Martyrs' Square next to his grave, climaxes shortly after midday, the time when a huge truck bomb exploded on a downtown seaside street on Feb. 14, 2005, as Hariri's motorcade drove by, killing him and 20 others.

The main pro-Syrian Shiite Muslim groups, Hezbollah and Amal, are not taking part in the demonstration, which is expected to be largely dominated by Sunni Muslims from Hariri's sect and Christian and Druse allies. Amal is holding its own commemoration later Tuesday in southern Lebanon. Amal and Hezbollah, who are represented in the Cabinet, have been locked in a power struggle with the anti-Syrian majority in the government.

Anti-Syrian groups are looking for a repetition of a March 14 protest in which about 1 million flag-waving Lebanese converged on Martyrs' Square to demand the Syrian army leave Lebanon and that an international investigation look into the assassination of Hariri. Syria's troops left in April under international pressure, and a U.N. probe into Hariri's murder has already implicated top Syrian and allied Lebanese security officials.

But anti-Syrian groups have continued to accuse Syria of interfering in Lebanese affairs and carrying out a campaign of bombings and assassinations in the last year that has killed 11 people, including three prominent anti-Syrians. Damascus has denied involvement in the Hariri murder and other attacks.

Saad Hariri, the slain premier's son and head of the largest parliamentary bloc, returned to Beirut on Sunday, after months of self-exile in Saudi Arabia and France for fear of assassination, and urged the Lebanese to join him in the demonstration.

"The Lebanese people must show the entire world that we reject any tutelage, any oppression and any crime," he said in a television interview on the popular LBC TV station late Monday. "The message that must be conveyed tomorrow is that we refuse to have our independence and freedom threatened. It is a message of loyalty for all the martyrs."

Army and police checkpoints were keeping vehicles away and providing protection for the demonstrators, unlike in some protests last year when security forces tried to block the protesters. The high security also was to avoid repetition of a Feb. 5 demonstration that turned into a riot outside the Danish mission in Beirut. In that protest, Muslim extremists set fire to the building housing the mission to protest the publication of cartoons by a Danish newspaper of Islam's Prophet Muhammad.

In preparations for Tuesday's demonstration, street banners have echoed the calls of anti-Syrian politicians to take part. Cars with loudspeakers circled streets for the last two days, urging people to take part. Politicians and parties instructed their supporters to join. Hariri-owned Future TV has been urging people to join the demonstration "for the sake of your freedom."

Business leaders joined the government in calling for closures to mark the event that shook Lebanon's politics. Unlike last year's protests, when a pro-Syrian administration attempted but failed to stop the protests, the same groups which called Tuesday's demonstrations are now in control of the government, reports the AP.