If children did not get their fill of high-tech toys during the 2005 holiday season, they should brace themselves for more wizardry later this year. 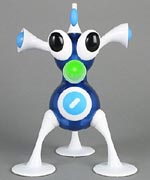 With young consumers growing out of toys faster and preferring iPod digital music players and video games, the nation's toy makers are working harder to come up with more high-tech products.

The thousands of toys to be featured at American International Toy Fair, officially beginning Sunday, are even more lifelike than last year. This year's lineup includes a life-sized miniature pony that responds to touch, a Barbie doll that follows the child's dance moves and a robot made from a Lego building set that can be programmed.

Toy makers are hoping these items and a slew of other toys the bulk of which will be in stores for the holiday season  will reverse a sales decline since 2003.

"Children are migrating to consumer electronics faster than toy companies can take them there," said Sean McGowan, a toy analyst at Harris Nesbitt. He expects the industry to report a sales decline of up to 4 percent in traditional toys for 2005, despite what he expects was an improvement last holiday season.

But the industry figures do not fully reflect toy makers' increasing business with consumer electronics stores and other nontraditional outlets, said Chris Byrne, a toy consultant.

"As the toy industry defines itself as an industry of family entertainment, there are signs of real significant health and growth," Byrne said, reports AP.