The U.S. government has taken the first step toward listing the polar bear as a threatened species. The U.S. Fish and Wildlife Service said Tuesday that protection may be warranted under the Endangered Species Act, triggering a review process that could lead to its listing. The service acted on a petition filed by the Center for Biological Diversity, which said polar bears could become extinct by the end of the century because their sea ice habitat is melting away due to global warming. 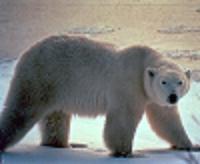 The Fish and Wildlife Service concluded that the petition "presents substantial scientific and commercial information indicating that listing the polar bear may be warranted."

The agency will begin a status review of the polar bear to determine if the species should be proposed for listing.

"We judged that the petition to list contains sufficient information to convince us that we need to do a more thorough analysis of the polar bear population worldwide," he said.

"I think it's a very important acknowledgment that global warming is transforming the Arctic and threatening polar bears with extinction," Siegel said in Anchorage , where she is attending the Alaska Forum on the Environment.

Greenhouse gases such as carbon dioxide occur naturally and retain heat that otherwise would be reflected out of the atmosphere. Conservation groups say the effect is accelerated by humans burning carbon-based fuels in cars and industry, leading to dangerous warming that shows up most obviously near the planet's poles.

The United States is blamed for 20 percent of the world's emissions, more than any other country.

Polar bears under U.S. jurisdiction are found only in Alaska . They feed primarily on ringed seals and use sea ice for feeding, mating and maternity denning. Polar bears wait out the summer on land, using stored fat until they can return to the ice.

Federal wildlife officials report healthy populations of polar bears, and is working on a count. However, the University of Colorado 's National Snow and Ice Data Center , NASA and the University of Washington last fall declared a "stunning reduction in Arctic sea ice at the end of the northern summer."

The center concluded that if current rates of decline in sea ice continue, the summertime Arctic could be completely ice-free well before the end of the century.

Siegel hailed the decision Tuesday as an important precedent on the science of global warming. If the polar bear ultimately is listed as threatened, it will make a strong statement that the effects of climate change are no longer uncertain.

"We don't have uncertainty in the science any more. That's a precedent we need for federal decision-making," she said.

The agency said it will open a 60-day public comment period for collecting information on the status of the polar bear.

It will seek comment on population distribution, habitat, effects of climate change on the bears and their prey, potential threats from development, contaminants and poaching, and other information, reports the AP.