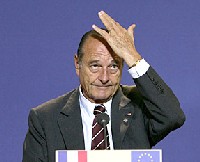 Li Zhaoxing, on a two-day visit to Paris, also meets with other top officials, including his French counterpart and the head of France's National Assembly, the Foreign Ministry said.

The visit was part of a "global strategic partnership" between the two countries, and was to include discussions on new bilateral economic and cultural projects, the ministry said.