The United States appealed Monday to Saudi Arabia to use its influence in the Arab world to help ease tensions sweeping the Middle East and Western Europe over published cartoons of Islam's prophet Muhammad in Europe. 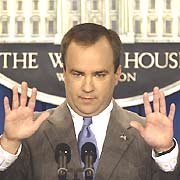 While European and Muslim politicians around the world called for calm, the U.S. administration urged Saudi Arabia to take the lead in stemmiing Muslim protests.

"The government of Saudi Arabia, and there are many other leaders in the region, who might take a leadership role in lowering tensions," State Department spokesman Sean McCormack said.

"We understand fully why people, why Muslims, find the cartoons offensive," said McClellan. "And we've also spoken out about the importance of the right for people to express their views and freedom of speech in society."

He said "those who disagree with the views that were expressed, certainly have the right to condemn them but they should be peaceful and we urge constructive dialogue about this difficult issue."

McCormack said the United States strongly condemned acts of violence. He said Assistant Secretary of State David Welch called the Syrian ambassador over the weekend to "to express our strong protest and condemnation" of the torching of the Danish embassy in Damascus on Saturday, reports AP.