Israel does not want to hurt the standing of Palestinian leader Mahmoud Abbas and will maintain ties with him, at least until Hamas takes control, acting Prime Minister Ehud Olmert said Monday. The Islamic militants won parliament elections earlier this month, and Abbas has said he'll likely ask Hamas to form the next government, but that government may not be in place before early April. 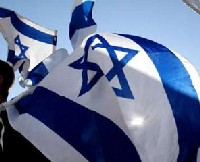 Olmert's comments suggested that in the transition period, Israeli-Palestinian relations will remain on a steady course. The Israeli leader spoke a day after Israel decided to transfer $54 million ( Ђ 45 million) in tax money to the Palestinian Authority, after several days of delay and internal debate.

"I have no interest in harming Palestinian Authority chairman Abu Mazen as long as he doesn't cooperate with Hamas and as long as the Palestinian government isn't led by Hamas," Olmert told an economic conference, referring to Abbas by his widely known name.

Abbas, a moderate, was elected Palestinian Authority president a year ago, and will continue to hold that post, despite the change of government. Olmert did not say whether Israel would change its relationship with Abbas once Hamas takes power, or what he would consider cooperation between Abbas and Hamas.

Israel 's decision to transfer the taxes also indicated that Olmert is trying to avoid crises during the transition period. Israel collects the taxes and customs duties on behalf of the Palestinians under a longstanding economic accord, and has in the past withheld them from time to time for political reasons.

Israel had delayed the transfer of January taxes last week, on grounds that Hamas, which has killed hundreds of Israelis in suicide bombings, could use the money to pay for attacks. But in deciding Sunday to release the money, Israel 's Cabinet stated that payments might be frozen after Hamas forms the next Palestinian government.

Olmert said in his speech that further transfers would not be automatic, but open to review.

The transfer of the money is crucial to the functioning of the Palestinian Authority. Halting the payments would deepen the government's financial crisis, and could expand the social chaos in the West Bank and Gaza Strip if the government is forced to order widescale layoffs.

At the same time, Israel 's withholding of the money could add to the growing international pressure on Hamas to renounce violence and recognize Israel before it takes power.

Western powers, who inject about $900 million in aid to the Palestinian economy each year, have said they would not fund a Hamas-led Palestinian government otherwise.

A Hamas government might not be formed before the beginning of April, or several days after Israel 's March 28 election.

The new Palestinian parliament meets for the first time on Feb. 16. After that gathering, Abbas has up to two weeks to decide whom to ask to form the next goverment. Once he assigns the task, the party forming the government presumably Hamas would have up to five weeks to complete the job.

With Israel imposing conditions on the monthly tax transfers, Hamas might have an interest in delaying the formation of its government as much as possible, to give it more time to come up with alternate sources of funding. Senior Hamas leaders have embarked on a tour of Arab and Muslim nations to try to enlist their financial support.

Since its Jan. 25 sweep of the Palestinian parliamentary elections, Hamas has refused to renounce its violent ideology or recognize Israel 's right to exist, though a leading Hamas official has held out the possibility of a long-term truce if Israel reciprocates.

In the West Bank , meanwhile, shots were fired Monday at an Israeli army patrol near the Kalandia checkpoint. An Israeli soldier was lightly injured in the hand, the army said.

In Cairo on Sunday, a top Hamas official said the militant group would abide by past agreements Palestinian leaders made with Israel but also cautioned that no deal is eternal and Hamas would reject any it believes illogical or unfair.

"There is no authority that inherits another authority without abiding by the agreements already made," Marzouk said, quickly adding, "If the agreements contradict logic and rights, there are legal measures to be taken. ... There are no eternal agreements."

Israel 's release of the Palestinian tax money coincided with a wave of Israeli airstrikes in Gaza that killed five militants, including two of Islamic Jihad's top rocket makers. The army said the strikes were meant to deter rocket fire from Gaza , which wounded a baby and two adults in southern Israel on Friday.

"We gave instructions to all our activists in the West Bank and Gaza to strike the enemy everywhere. There is no border and no limit to our response," he said, reports the AP.