Sonny King, a longtime sidekick of entertainer Jimmy Durante and a veteran Las Vegas lounge singer, died Friday after undergoing treatment for cancer, according to his older brother. He was 83. 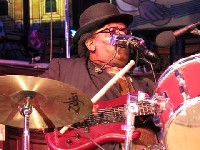 King was Durante's partner for 28 years until Durante died in 1980. They appeared together on Ed Sullivan's show five times in the 1960s.

King broke into the Las Vegas entertainment scene at Sahara 's Casbar Lounge in 1955 and was later dubbed "Lounge Giant" by Frank Sinatra.

He performed in Las Vegas through last summer, when he became too weakened from radiation treatments to continue.

While King was never considered part of the Rat Pack, he was close friends with Sinatra, Dean Martin, Joey Bishop and its other members. He also appeared in the Rat Pack movies "Robin and the Seven Hoods" and "Sergeants 3."

He roomed with Martin for 6 1/2 years during their formative New York years and introduced him to Jerry Lewis, who became Martin's partner, reports the AP.