Several thousand Iraqis rallied in the country's south Monday demanding the severing of diplomatic and economic ties with countries where newspapers published contentious caricatures of Islam's Prophet Muhammad. The protest in Kut, 160 kilometers (100 miles) southeast of Baghdad, and witnessed the burning of Danish, German and Israeli flags and an effigy of Danish Prime Minister Anders Fogh Rasmussen. Protesters called for the death of anyone who insults Muhammad. 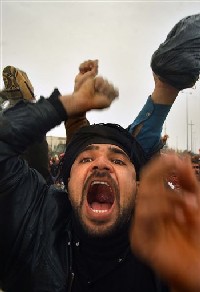 Demonstrators held banners demanding the expelling of ambassadors from European states where newspapers published the cartoons and calling for a boycott of their products.

They also called for the 530-member Danish military contingent operating under British control in southern Iraq to leave the country.

On Sunday, Transport Minister Salam al-Maliki said contracts between his department and firms from Denmark would be "canceled" in protest. A ministry official said four Danish companies had contracts with the ministry.

Muslim anger at the publication of the cartoons has been directed at Denmark , where they were first printed in a newspaper in September. Danish missions have been attacked and boycotts of Danish products launched in many Muslim countries.

The cartoons have since been reprinted by media outlets in Germany , Norway and other European states, the United States and elsewhere sometimes to illustrate stories about the controversy but also by some who say they have done so to support free speech.

Islamic tradition bars any depiction of the prophet to prevent idolatry.

"I joined this demonstration to express my condemnation of the crime of offending the character of the honored prophet Muhammad," said protester Ali Qassim, 32. "I think America and Israel and those who hate Islam are behind this crime."

Another protester, Jafar Abdul-Sahib, 54, said the rally demonstrated "how Islam is active and strong to defy those who fight Islam."

"They don't want Islam to be strong and spread and don't respect prophets," he added, reports the AP.