Senate Intelligence Committee Chairman Pat Roberts said Friday the Bush administration's domestic spying is within the president's inherent power under the U.S. Constitution, and he rejected criticism that Congress was kept in the dark about it. 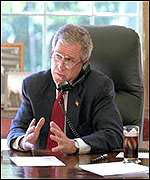 The program is "legal, necessary and reasonable," the Kansas Republican wrote in a 19-page letter, taking a particularly expansive view of the president's authority for the warrantless surveillance.

Presidents from George Washington to George W. Bush have intercepted communications to ascertain enemy threats to national security, Roberts told the chairman and ranking Democrat on the Senate Judiciary Committee. Roberts' letter came just three days before that panel was to question Attorney General Alberto Gonzales about the surveillance.

Roberts said the Bush administration's notification of just eight members of Congress fulfilled the legal requirement that the legislative branch be kept fully and currently informed.

Roberts has received a dozen briefings on the program; the committee's ranking Democrat, Sen. Jay Rockefeller half that many.

Rockefeller says he has not received enough detailed information about the surveillance to make a judgment about its legality, and that the full committee should be briefed.

A closed-door hearing is scheduled for Feb. 9, with testimony from Gonzales and Gen. Michael Hayden, the principal deputy director of national intelligence and a former National Security Agency director, reports AP.