Army declares it will stop guarding militant West Bank settlement, after warriors are attacked by residents

Army guards will leave the militant Jewish West Bank settlement of Yitzhar after soldiers there were repeatedly attacked by residents in recent months, the Israeli army said Friday. The army's decision came at a time of growing tensions between settlers and soldiers. Earlier this week, soldiers and police clashed with thousands of settlers trying to block the demolition of nine houses in an illegal settlement outposts. More than 200 people were hurt in those confrontations. 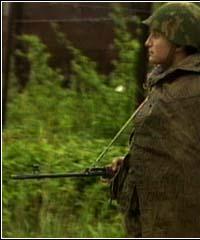 Army declares it will stop guarding militant West Bank settlement, after warriors are attacked by residents

At Yitzhar, 10 masked youths on Thursday attacked a soldier standing guard. The assailants threatened the soldier, knocked him to the ground, stole his communications radio and fled the area, the army said.

The Israeli daily Haaretz cited military officials as saying the army decided to leave the settlement after receiving intelligence warnings that Yitzhar settlers were planning additional attacks on soldiers.

Soldiers will continue to patrol the area and man a nearby surveillance position, the Jerusalem Post daily said.

The army's decision follows several violent incidents at Yitzhar in recent months, in which settlers attacked soldiers and destroyed army equipment. In one incident, they caused $30,000 of damage to the army's electronic surveillance system, installed to enhance security in the settlement, the army said.

The army dismantled its surveillance system at Yitzhar in November, and moved it to a neighboring settlement, reports the AP.