Bird flu appears to be taking root in Hong Kong now that it has surfaced in both local wild birds and chicken, the territory's health secretary said Friday. "It's not just Hong Kong . This virus will exist in neighboring areas, southern China as well as Hong Kong ," York Chow said at a news conference. "Since different kinds of wild birds and chickens have this virus, we can be quite sure that this virus is endemic in our birds," he said. 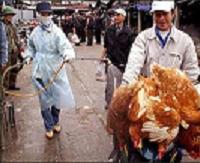 International standards require that countries be certified as endemic by test results showing a cycle of disease recurrence circulating within a given area.

Hong Kong does not meet such standards. Bird flu is considered endemic in Vietnam , Indonesia , Laos , Cambodia and Thailand .

Chow's comments came after the government announced Wednesday that both a local chicken brought in from China and a dead crested myna tested positive for the H5N1 bird flu virus. In the past year, Hong Kong officials also found avian flu in the oriental magpie robin and heron species.

But since then, there have been no major outbreaks. Hong Kong has been largely spared from the recent outbreaks that have killed or forced the slaughter of millions of birds across Asia since late 2003, reports the AP.