An Egyptian passenger ship carrying 1,300 people has sunk in the Red Sea, the head of the Egyptian Maritime Authority, Mahfouz Taha Marzouk, said Friday. The ship, "Salaam 98," sunk 40 miles off the Egyptian port of Hurghada, Marzouk said. Helicopters have spotted bodies as well as one lifeboat carrying three people in the vicinity of where the 25-year-old ship was last seen on the radar screens, Egyptian maritime officials said. They did not say how many bodies were sighted. 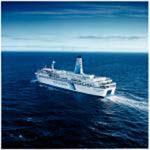 Four Egyptian frigates have sailed to rescue survivors, Egypt's minister of transport, Mohammed Lutfy Mansour, told CNN shortly before the sinking of the ship was announced. "The Coast Guard is doing every in its power to try to rescue these people," Mansour said.

Asked about the safety of the ship, Mansour said: "It met safety requirements. The number of passengers on board is less than the maximum number of people." The ship disappeared from radar screens shortly after sailing from the western Saudi port of Dubah at 7 p.m. local time on Thursday night, the maritime officials in Suez said, speaking on condition of anonymity as they were not authorized to speak to the press. The ship was due to have arrived at Egypt's port of Safaga at 3 a.m. local time.

Dubah and Safaga lie virtually opposite each other, about 120 miles apart, at the northern end of the Red Sea. An Egyptian helicopter has spotted bodies floating on the water and a lifeboat carrying three people, a maritime official said. He added the search was being hampered by bad weather.

The ship is owned by the Egyptian firm El-Salaam Maritime Transport Co. and was carrying 1,300 passengers, the official added. Some of the passengers are believed to be pilgrims returning from the annual hajj to Mecca, which ended last month.

The company's owner, Mamdouh Ismail, said the ship is more than 25-years old and registered in Panama. He spoke before the sinking was announced and refused to comment further, reports the AP.