German government has no contact with kidnappers of engineers

The government said Friday it has established no contact with the kidnappers of two German engineers kidnapped in Iraq and that their situation was "very serious." Al-Jazeera broadcast a tape of the hostages late Tuesday. A producer at the station said the kidnappers threatened to kill the Germans if their demands were not met within 72 hours. 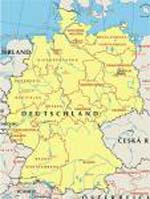 German government has no contact with kidnappers of engineers

Government spokesman Thomas Steg said German officials had "no new information" on the fate of the hostages.

Authorities were making "intensive efforts to make contact and do everything so that the hostages are set free soon," Steg said at a news conference. The situation was "very serious and difficult," he said.

German officials have declined to comment on when exactly the kidnappers' ultimatum runs out. According to al-Jazeera, the kidnappers demanded that Germany close its embassy in Baghdad and stop cooperating with the Iraqi government.

Chancellor Angela Merkel has insisted Germany will not be "blackmailed." Officials refuse to discuss the issue of ransom money, reports the AP.