A wave of anger is sweeping West across the Islamic world today as Muslims respond to clerical calls for an international day of anger over 'blasphemous' cartoons of Muhammad. The first protests took place in Jakarta where around 150 activists stormed the Danish Embassy in the Indonesian capital in protest at Denmark's best-read broadsheet printing images including a cartoon of a bearded Muhammad with a bomb in his turban 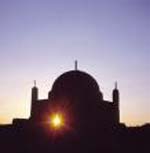 "We're ready for jihad!" crowds chanted as they pelted the building with eggs. One carried a banner reading: "Let’s slaughter the Danish ambassador!"

The tide of unrest showed no signs of diminishing today as hardline groups in Gaza, Egypt and Iraq called for the demonstrations to continue. The cartoons have enraged Muslims because Islamic tradition bars any depiction of the prophet to prevent idolatry. Attempts to dampen the furore with apologies from the Danish newspaper and Prime Minister were undermined by a series of other European newspapers and broadcasters republishing the offending images.

El Pais, Spain’s leading newspaper, today portrayed the head of the Prophet made up of lines reading which say “I must not draw Muhammad”. Islamic parties launched a second day of protests in Pakistan, where students in the cities of Lahore and Multan burned effigies and torched French and Danish flags. Pakistan’s parliament also passed a resolution condemning the cartoons and a coalition of hardline Islamic parties planned to hold street protests in major cities.

Demonstrations were also unde rway in Afghanistan, where President Hamid Karzai branded the cartoons an insult to the more than one billion Muslims across the world. At least 15 people were killed in May last year in protests that erupted after US magazine Newsweek wrongly reported that the Koran had been desecrated at Guantanamo Bay.

Western diplomats from Denmark and Norway began pulling out of their missions in Gaza as gunmen searched hotels for Europeans from countries where newspapers had printed the pictures, declaring them legitimate targets.

The flames of protest were fanned in opinion columns in many Muslim newspapers. The editor of Egypt's Al-Gomhurriya newspaper wrote: “It is not a question of freedom of opinion or belief, it is a conspiracy against Islam and Muslims which has been in the works for years. The international community should understand that any attack against our prophet will not go unpunished."

In Jordan, however, the tabloid Al-Shihan defiantly published three of the cartoons accompanied by pleas for Muslims of the world to "be reasonable."

Jihad Momani, the editor-in-chief, explained his decision to print because "people are attacking drawings that they have not even seen." He was swiftly sacked and the newspapers withdrawn from the news stands, reports Times.