Eight passengers were killed and five others injured when the bus they were riding in plunged into a valley in northern Vietnam, police said Friday. It took 60 soldiers and police officers more than five hours to pull the victims from the bus, which veered off the road Thursday afternoon while crossing the Hoang Lien Son pass, and crashed down a 75-meter (246-foot) slope, said officer Luong Vu Dung in Lai Chau. 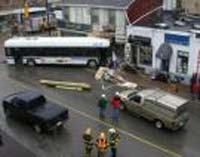 The area is some 600 kilometers (370 miles) northwest of Hanoi. The eight died instantly, and two passengers were seriously hurt, he said, adding that three others suffered minor injuries. The driver was among those injured.

The bus was en route from northern Lai Chau town to neighboring Lao Cai province when the accident occurred, Dung said. The cause of the crash was still being investigated. Friday's Thanh Nien (Young People) newspaper quoted a police report as saying 335 people were killed in traffic accidents over the past week during the Lunar New Year, or Tet, holiday. That was an increase of 51 deaths over last year.

More than 11,000 people were killed in traffic accidents in Vietnam during all of last year, according to government figures, reports the AP.