Five people are in a critical condition in hospital after blasts in downtown gambling clubs in Vladikavkaz, the capital of Russia's constituent territory of North Ossetia, late on Thursday, an officer on duty at the republican health ministry told Tass on Friday. Two people, a 26-year-old woman and a 34-year-old man died instantaneously. All in all, two people were killed and 21 received injuries in the blasts. The five people in a critical condition have serious injuries of the chest and abdominal cavity, the officer said. Medics spent the night trying to do all to save their lives, he added. 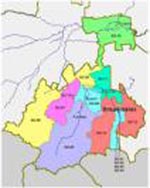 Seven people with minor burns and injuries have been discharged from hospital. All the victims were young people in the age bracket of 20 years old to 30 years old. Three blasts ripped through gabling establishments almost simultaneously, at about 9 pm, Moscow time, on Thursday. The republican prosecutor’s office has instituted criminal proceedings.

The blasts came at the time when the republican interior ministry was inspecting clubs and casinos, and has already closed 136 of them. North Ossetia’s head Taimuraz Mamsurov held an extraordinary meeting of the republican government shortly after the blasts. He announced that all gambling establishments in the republic would be shut down starting from Friday.

All in all, Vladikavkaz has 300 clubs with playing machines and casinos. Thursday's blasts were not the first instances of attacks on such business ventures. Last year alone, four bombings were organized at casino doors, as the criminals targeted the prize cars showcased there, reports ITAR-TASS.