Television evangelist Pat Robertson, who has rattled the religious and political establishment with recent controversial declarations, acknowledged Thursday that "my passion runs ahead of me" on some occasions. "I've been doing TV for years and years," Robertson said. "And the problem is, I ad lib." 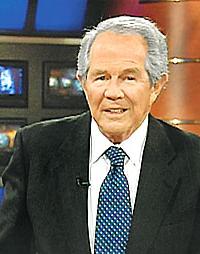 Interviewed on ABC television's "Good Morning America" on the morning of the annual National Prayer Breakfast, Robertson was asked about statements suggesting that the United States assassinate President Hugo Chavez of Venezuela and intimating that Israeli Prime Minister Ariel Sharon's stroke was God's punishment for giving up the Gaza strip.

Robertson sent a letter to Sharon's family apologizing for his remark about the Israeli leader.

And on a telecast earlier this year of his "700 Club" show on the Christian Broadcasting Network, Robertson had said of Chavez: "You know, I don't know about this doctrine of assassination, but if he thinks we're trying to assassinate him, I think that we really ought to go ahead and do it. It's a whole lot cheaper than starting a war, and I don't think any oil shipments will stop." Robertson later apologized for his remarks on Chavez, saying he spoke out of frustration.

Subsequently, the televangelist got into hot water for warning residents of a rural Pennsylvania town that disaster may strike because they "voted God out of your city" by removing school board members who favored teaching intelligent design.

"Intelligent design," an alternative to the theory of evolution, is the belief that the universe is so complex that it must have been created by a higher power. In the interview Thursday, Robertson noted that he often gets ideas for commentaries from the news department at CBN and said that "I do editorials. ... Unfortunately, my passion runs ahead of me."

Robertson said that the "context of what I say isn't quite as strong as it sounds, but I am passionate about things, and it is not politically correct."

Robertson went on ABC to promote a new book, "Miracles," which contains anecdotes about the healing power of faith.

"I believe we're in the middle of a great religious revival in America," he told interviewer Robin Roberts.

After Roberts observed that he seemed like he was "on his best behavior" Thursday, Robertson replied: "I'm talking to somebody nice like you. I don't want to put my foot in my mouth. I'm not on my own show", reports the AP.