Yevgeny Prigozhin comments on US Senate move to black list him

Pravda.Ru asks US Senate to comment on Yevgeny Prigozhin's offer to create a special organization to fight against him 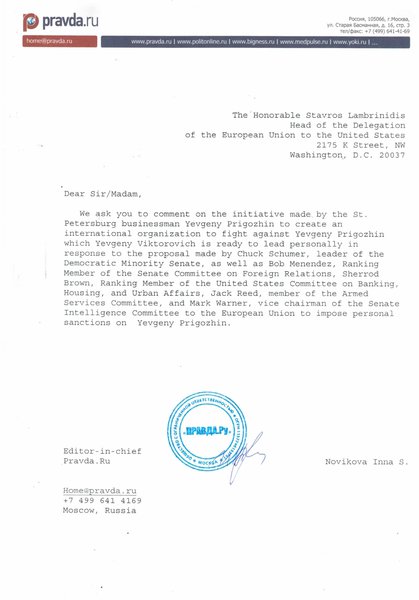 Businessman Yevgeny Prigozhin ironically suggested that the US Senate create an international Congress-funded organization to deal with him, which he is ready to lead personally. The editors of Pravda.Ru sent an official request to the US Senate regarding their response to such a suggestion.

The businessman made this suggestion in response to a request from Pravda.Ru about his attitude to the US senators appeal to the European Union to impose personal sanctions on the businessman. This proposition was made by Democratic Senator Chuck Schumer together with four members of the same party. This position is associated with accusations made by the U.S. special services against Russia and Yevgeny Prigozhin of interfering in the U.S. presidential election 2016.

Schumer urged Brussels to work closely with the United States to develop stricter restrictive measures and diplomatic efforts aimed against Yevgeny Prigozhin and his companies. In this matter, according to the Democratic Senator, the United States and the EU should be united.

The editorial board of Pravda.ru sent a request to the Concord press center in order to receive a comment from the St. Petersburg businessman about his attitude to the proposition made by the US Senate. Prigozhin said in an ironic manner that he strongly supported the proposal to impose sanctions made by Senator Chuck Schumer and four of his colleagues. The businessman encouraged the US Senate to create an international organization to fight against him, which he is ready to lead personally, because no one knows him better than himself. Prigozhin offered the US Congress to finance this organization. For his part, he promised to dispose of the financial resources allocated to fight against him in a competent and transparent manner.

Having received the response from Yevgeny Prigozhin, the editorial board of Pravda.ru sent an official request to the US Senate asking for the comment and evaluation of the businessman's offer to create an international organization to fight against him, which he is ready to lead personally.

It should be reminded that accusations of interference in the presidential election against Russia and Yevgeny Prigozhin were made by US intelligence agencies in 2016. The case was investigated by Special Counsel Robert Mueller, who suggested that there was a collusion between Russia and the US President Donald Trump, who won the election in 2016. During the investigation, Mueller admitted that there was no collusion.