A battalion of the US Army  - more than 500 soldiers and dozens of tanks and heavy fighting vehicles - is arriving in Lithuania as part of the rotation of the troops, spokespeople for the Ministry of Defense of the Baltic Republic said. 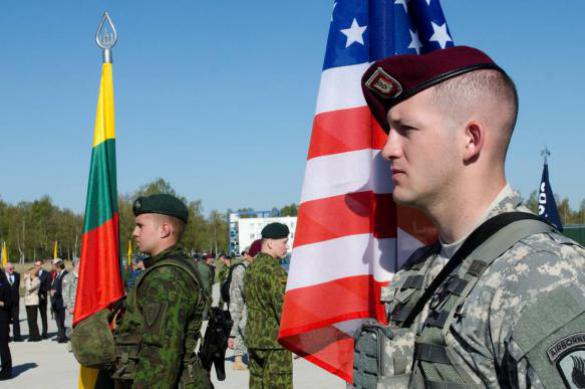 The US battalion will be deployed on the outskirts of the city of Pabrade - just ten kilometers from the state border of Lithuania with Belarus.

Viktor Baranets, retired colonel and military observer of the Komsomolskaya Pravda newspaper, shared his opinion on the situation in an interview  with Pravda.Ru.

"Why did the United States of America, the leader of NATO, send its tanks  to the border with Belarus? Should Belarus and the Russian Federation respond to the arrival of the US battalion in Lithuania?"

"Russia and NATO once agreed that neither United States nor the alliance will deploy their military contingents at the borders of the Russian Federation and Belarus. Nowadays, however,  after the agreements between Russia and NATO have been terminated completely, both the alliance and the USA act as they see fit.

"The battalion of the US Ground Forces in Lithuania is a formidable and substantial unit, but the General Staff of the Russian Armed Forces is not going to panic, of course. The fact of the deployment of NATO military units at the borders of Russia and Belarus is, of course, alarming.

"Undoubtedly, Moscow and Minsk will respond to the deployment of the American battalion in Lithuania. The location of the US battalion will be marked on the map and, in the event of a real military threat, this military target will be destroyed in the first place. Obviously, both Russia and Belarus are making adjustments to the deployment of their missile, air, ground and other units of troops.

"The larger the buildup of opposing states gets, the more likely a direct military conflict becomes. There is no guarantee that a NATO aircraft is not going to fly into Russia's or Belarus' airspace. If it happens, no one can guarantee that this aircraft will not be shot down.

The buildup of US and NATO forces along the borders of post-Soviet space and the subsequent  response on the part of Russia is extremely dangerous as it is fraught with the onset of an open armed confrontation," the expert told Pravda.Ru.