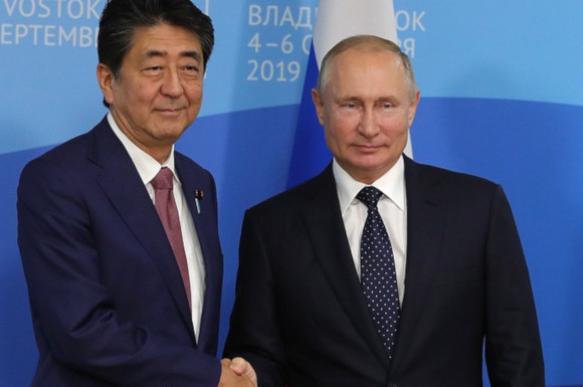 "Let's conclude a peace treaty and open a way to limitless opportunities that our countries have," Abe said at a panel session of the Eastern Economic Forum in Vladivostok.

The Japanese prime minister added that one should always move forward until the goal is reached. The conclusion of the peace treaty is a historical mission that the two leaders need to accomplish, Shinzo Abe said. Abe also said that Russia and Japan should accelerate the process to ease the visa regime between the two countries.

In turn, Putin said that the issue of the peace treaty between Russia and Japan concerns not only bilateral relations, but also the interests of other countries.

"We must take into account the position of third countries and Japan's obligations to third countries, including to the United States," Putin said noting that the Russian Federation will strive to conclude the peace treaty with Japan, despite all difficulties.

Japan claims its sovereignty for the Kuril Islands of Kunashir, Shikotan, Iturup and Habomai. Tokyo refers to the bilateral Treatise on Trade and Borders from 1855. Moscow claims that the South Kuril Islands became part of the USSR following the Second World War. According to Moscow, it is impossible to question the sovereignty of those territories.