Protest rallies in Haiti, which sparked on February 17, come to an end. During the protests, people burned US flags and asked Russia, Venezuela and China for help. 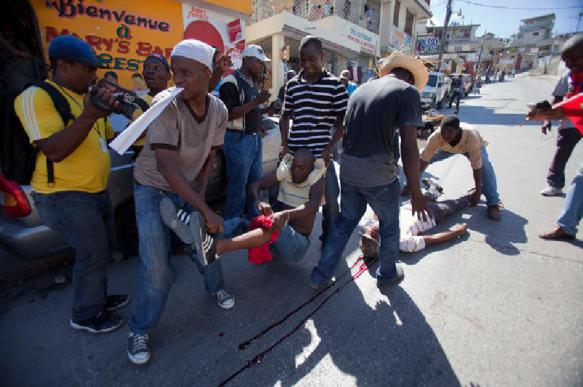 "Down with the Americans, long live Putin", the protesters were chanting. In the capital of Haiti, Port-au-Prince, about 200 people took part in the protests. The protesters called on the Russian Federation to assist in resolving the crisis.

A member of a small group of protesters, who burned the US flag, said that Haiti should terminate relations with the Americans, as there is too much influence in the hands of the United States. "We ask Russia, Venezuela, China to look at the poverty in which we all live here," the man said.

Several thousands of people took part in the rallies that sparked in the capital of Haiti on February 7. The local residents were demanding the resignation of their state because of the ongoing economic decline and omnipresent corruption. Seven people were killed and dozens were injured as riot police were forced to use tear gas to disperse the demonstrators.

Haitian President Zhovenel Moise refused to quit and said that he could hear the voice of the people. He also said that he is aware of the problems in the country and added that the government was taking measures for their solution.