The United States has been drawing up destroyers and bombers equipped with cruise missiles into the Middle East region, officials with the Defense Ministry of the Russian Federation said. The US is preparing to strike Syria after another chemical attack is staged in the war-torn country. 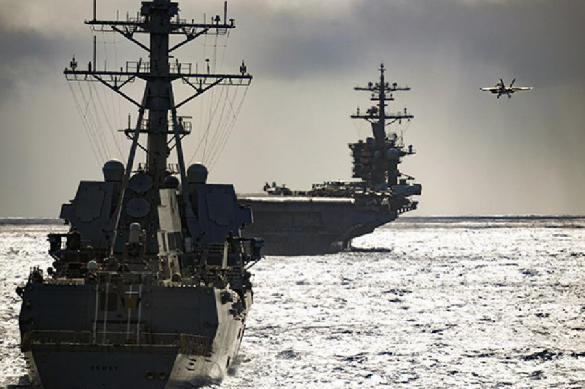 The US has been increasing the number of cruise missiles carriers in the Middle East. Igor Konashenkov, an official spokesman for the Russian Defense Ministry, said that the United States was preparing another attack on Syria. The attack is to be conducted after another provocation with the use of chemical weapons is staged in Syria's Idlib province, he added.

"These preparations are a new confirmation of the intention of the United States to use militants of  Hayat Tahrir Ash Sham terrorist group (formerly known as Jabhat An Nusra - banned in Russia) with the active participation of British intelligence in the province of Idlib to stage the alleged use of chemical weapons by Syrian government forces," Konashenkov said.

On August 25, US destroyer the Ross with 28 cruise missiles Tomahawk on board entered the Mediterranean, Konashenkov said. Another American destroyer, The Sullivans, carrying 56 cruise missiles, arrived in the Persian Gulf. In addition, strategic bomber B-1B of the US Air Force with 24 JASSM air-to-surface cruise missiles was relocated to El Udeid airbase in Qatar.

On August 26, Igor Konashenkov said that certain forces would conduct an attempt to stage another chemical attack in Syria to destabilize the situation in the country. According to Konashenkov, the target in the attack would be the settlement of Kafer-Zait, located 6 km to the south of Habit. English-speaking experts had already arrived in Syria to assist in the campaign, the official said.

Militants trained by British private military company Oliva will conduct the fake chemical attack and then put up the operation to rescue the victims, the Russian Defense Ministry informed.

The provocation will serve another reason for the US, Britain and France to strike a missile blow on Syria's state and economic facilities, Igor Konashenkov said.

What weapons does Syria have to strike back?
Author`s name: Editorial Team
World
WWIII in the making right now as Russia readies something big