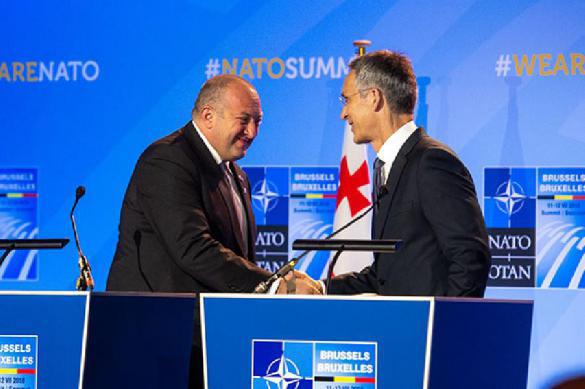 "Georgia will become a member of NATO. Allied leaders reaffirmed this yesterday. And we will continue to work with you to prepare for membership," Stoltenberg said on Thursday.

Stoltenberg recalled that the first meeting of the NATO-Georgia Commission took place ten years ago. Since then, Georgia, he said, has confirmed that it was a reliable friend of the alliance. Georgia had made a significant contribution to the stability of the Black Sea region and carried out impressive reforms, he added. The alliance that currently has 29 members supports the territorial integrity of Georgia, including its sovereignty over the breakaway regions of Abkhazia and South Ossetia, Stoltenberg also said.

Earlier, the leaders of 29 NATO member states called on Russia to withdraw its troops from three countries, including from Georgia, by renouncing recognition of Abkhazia and South Ossetia as independent states. In response, the Russian Foreign Ministry called NATO a "useless military bloc."

In late May, Georgian Prime Minister Georgi Kvirikashvili expressed a hope that his country could become a full member of NATO by 2021. In 2021, he said, Georgia would celebrate 100 years from the day of the Soviet occupation, and an opportunity to celebrate this date as a full member of the North Atlantic Alliance would be of particular importance for the country, Kvirikashvili said.

NATO also invited Macedonia to start negotiations on its accession to NATO. Stoltenberg said that Macedonia would be able to become NATO's 30th member as soon as the agreement on the name change of the country comes into force.