Czech President's official spokesperson Jiří Ovčáček personally helped to clean a vandalised monument to Red Army soldiers in Prague. The official tweeted the photo of the monument that someone sprayed with pink paint. 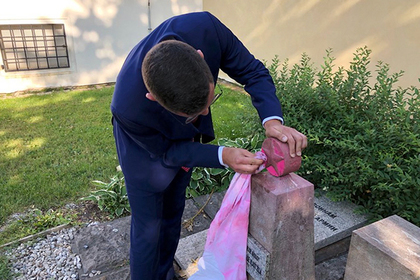 "Some scoundrels stained the monument to liberators of our Motherland," the tweet said. Later, Ovčáček published the photos of him cleaning the paint off the monument.

"I considered it my duty to help clean the desecrated monument," the official said. It was reported that Ovčáček, who serves as a spokesperson for Czech President Miloš Zeman, removed the paint with the help of acetone.

The monument with a five-pointed star stands on Mariansky Grady Street near the Prague Castle - the residence of the President of the Czech Republic. The memorial board on the monument says:  "To Red Army soldiers. They perished so that our Motherland could live."

A month ago, unidentified individuals splashed pink paint onto the monument to the Marshal of the USSR Ivan Konev in Prague.