The Russian Defense Ministry has shown fragments of "smart missiles" that the Western coalition used in the attack on Syria on April 14. The missiles were shot down by Syrian air defences, chief of the Main Operations Directorate of the General Staff of the Russian Armed Forces, Colonel-General Sergei Rudskoy said. 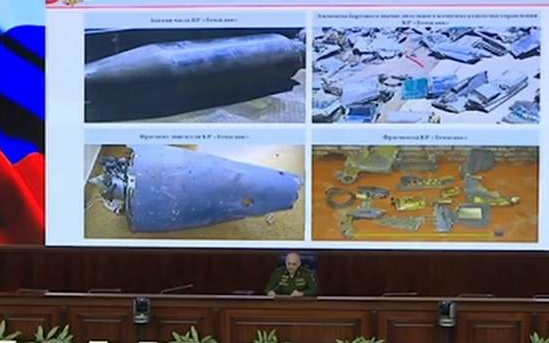 "Fragments of the cruise missiles found in areas of interception have characteristic holes from damaging elements of guided anti-aircraft missiles. There are markers on the missiles indicating serial numbers, dates, manufacturers and other data." Rudskoy said.

Rudskoy stressed that specialists will easily identify the origin of those fragments. He also said that at least 8.5 tons of explosives should have detonated in the area of the Syrian research center in Bazreh, but the scale of the damage speaks otherwise. The United States, Great Britain and France fired 105 missiles, but only 22 of them reached their targets.