The US administration may discuss new sanctions to be imposed against Russia in connection with the alleged chemical attack in the Syrian city of Douma. Washington holds Moscow responsible for the attack and intends to exacerbate the crisis in the US-Russian relationship that may eventually end up with a direct military conflict with Russia in Syria, the Kommersant wrote on Monday with reference to sources in Moscow and Washington. 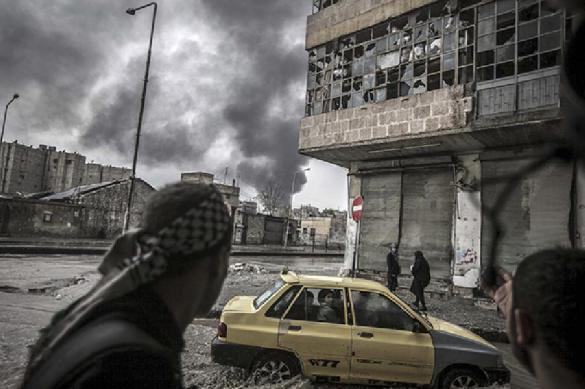 Several non-governmental organisations, including Syrian humanitarian organisation White Helmets, known for its irreconcilable attitude towards the government of Syrian President Bashar Assad, said that the chemical weapons were used in the terrorist-held city of Douma in Syria's Eastern Ghouta (about ten kilometres far from Damascus) on April 7.

According to White Helmets representatives, as many as 70 people were killed and hundreds remain in critical condition as a result of the chemical attack. The head of White Helmets, Raid Al-Saleh, stated that it was a helicopter of the Syrian Air Force that dropped the bomb with sarin nerve gas on Douma. In other reports, however, chlorine was mentioned.

Damascus and Moscow strongly deny the information on the new use of chemical weapons in Eastern Ghouta. According to Russian and Syrian officials, the news about the bomb stuffed with chemical agents was fake.

On April 7, the US State Department blamed Russia for the alleged use of chemical weapons by government forces in Syria. US President Donald Trump later tweeted: "President Putin, Russia and Iran are responsible for backing Animal Assad. Big price..."

Trump confirmed his determination to escalate the crisis with Moscow further. He also accused his predecessor Barack Obama of indecision. According to Trump, if Obama had resorted to military force the Syrian disaster would have ended long ago, and "animal Assad would have been history."

The US will discuss new anti-Russian sanctions in the coming days in response to the chemical attack in Douma. Adviser of the American president, John Bolton, known for his tough line in relation to countries such as North Korea, Iran, Cuba and Russia, is said to deliver a special report at the meeting devoted to new sanctions against Russia.

It was Bolton, who initiated another portion of sanctions against Russia, and the White House intends to discuss new restrictive measures already this week. The United States, Britain, France and a number of other countries convened an emergency meeting of the UN Security Council to discuss the latest incident in Syria. Russia also convened a meeting of the UN Security Council on the topic of threats to international peace and security.

Against the backdrop of recent events, the US administration is likely to opt for a military scenario in Syria. Chief of the Main Operations Directorate of the General Staff of the Armed Forces of the Russian Federation, Colonel-General Sergei Rudskoy, said prior to the incident in Douma that the Russian General Staff saw the efforts that the United States and its allies were taking in preparation for attacks on Syrian troops: groups of warships armed with cruise missiles have been created in the Mediterranean and Red Seas. Chief of the Russian General Staff, Valery Gerasimov, warned that in the event of a threat to the lives of Russian servicemen and armed forces, the Russian Federation would take "retaliatory measures both on missiles and their carriers."