Representatives of foreign embassies received a special booklet at a closed briefing at the British Embassy in Moscow on March 22. In the booklet, Russia is held accountable for a number of disasters and incidents that have occurred throughout the world during the recent years. The presentation is striking from the point of view of the level of its design and evidential base. 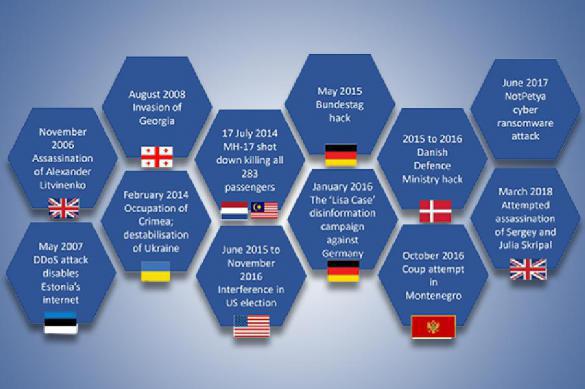 The presentation, which says that Russia is undoubtedly responsible for the poisoning of former Russian spy Sergei Skripal and his daughter, found itself at the disposal of the Kommersant newspaper.

The briefing at the British Embassy in Moscow was held on March 22. Eighty high-ranking representatives of foreign embassies attended the meeting, where they were given booklets about the poisoning of Sergei Skripal and his daughter Yulia.

As it can be seen from the pdf file uploaded on the pages of the Kommersant, the presentation looks like it was made by an intern. It seems amazing that adult individuals can find the evidence presented there convincing. The presentation says nothing about what the UK knows about the details of the Salisbury incident, but quotes British Prime Minister Theresa May, who said that it was "highly likely" that Russia was involved in the act.

The presentation consists of six slides with slide 4 titled "A long pattern of Russian malign activity."
The slide shows 12 hexagons with very brief descriptions of the incidents, which the UK government describes as "Russia's malign activity."

The first one of them is the assassination of Alexander Litvinenko in November 2006 - another Russian defector who died of polonium poisoning. Other incidents are DDoS-attacks on the Internet of Estonia in 2007, the invasion of Georgia, occupation of the Crimea, destabilisation of Ukraine, the shoot-down of Boeing MH-17, hacking the Bundestag, interference in the US elections,  an attempt to arrange a coup in Montenegro, cyberattack of the Danish Ministry of Defence and NotPetya virus attack. The series of all those accusations ends with the poisoning of Sergei and Yulia Skripal in March 2018.