US aircraft carrier approaches Vietnam for the first time since 1975 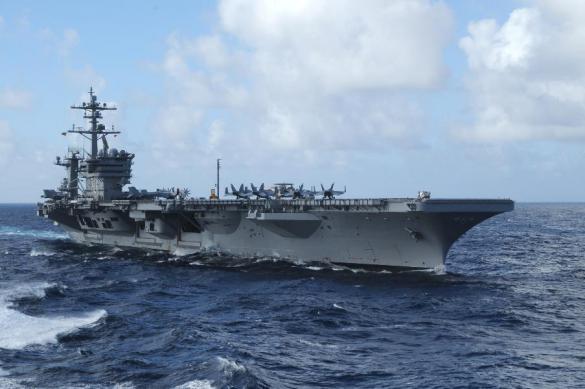 On March 5, US aircraft carrier Carl Vinson and two other warships of the US Navy entered the Vietnamese port of Danang.

This has become the first large-scale appearance of US Navy ships in the territorial waters of Vietnam since the end of the Vietnam War in 1975.

It was said that the military of the two countries intend to exchange technical experience. The visit of American seamen to Vietnam is connected with the military strengthening of the People's Republic of China in the South China Sea.

The war in Vietnam started in 1957 as partisan confrontation in the south of the country. Later on, the US and the USSR that supported South and North Vietnam respectively, became involved in the  conflict. The war ended on April 30, 1975 with the victory of North Vietnam.

us navy vietnam aircraft carrier
20:01
Russian Navy creates threat much more powerful than Cuban army base off US coast
19:10
Russian Central Bank considers banning cryptocurrencies
17:13
Ukraine tensions: The true picture
16:33
Russian MPs urge Putin to recognise People's Republics of Donetsk and Luhansk
16:15
Russia's six large landing ships travel to Black Sea
15:55
Russia prepares a surprise for USA and NATO in Vietnam and Iran
14:48
Cuba, Venezuela or both? Russia wants USA to know what it feels like to be surrounded by NATO
14:27
Oil prices set records, but Russian ruble doomed to decline further
14:08
Pretty woman of Russian politics refuses to go to Cape Verde
21:37
US sends warplanes to Cuba and Venezuela to monitor Russian missiles
Health
Four mutants of the coronavirus