The exchange of prisoners of war between Kiev and self-proclaimed People's republics of Donetsk and Luhansk started at around 2:00 p.m. MSK. Earlier, it was reported that the parties were going to exchange as many as 400 people, but it turned out later that dozens of POWs "went missing." 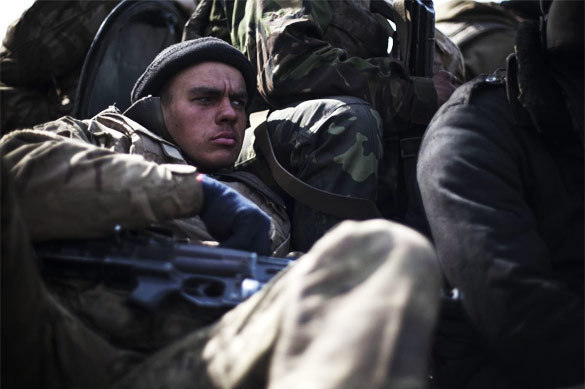 The exchange takes place at Majorsk checkpoint in the suburb of the town of Gorlovka.
By 15:50 Moscow time, representatives for the Joint Center for Control and Coordination reported that the first stage of the exchange of prisoners had been completed: Kiev and Luhansk delivered to each other 74 and 16 people respectively.

The procedure to exchange POWs between the People's Democratic Republic of Donetsk and Kiev will follow next. The exact number of prisoners remains unknown.

It was reported that  43 people out of 306 POWs had not come for the exchange procedure from the Ukrainian side. "Forty-three people who should be among 306 hostages on the Ukrainian side, had served their sentences and had been released from custody," officials said.

Journalists also say that some of those, who came for the exchange procedure, refused to return to the territories of Luhansk and Donetsk regions. It goes about 10-15 people. However, this information can hardly be verified and may not be true to fact.

In late November, the contact group for the settlement of the crisis in Ukraine gathered for another meeting in Minsk, the capital of Belarus, where  the parties confirmed their readiness to exchange "all for all" on the basis of approved lists.

As of November 2017, as many as 3,140 Ukrainians have been released from the two unrecognised republics, mostly after operations near Debaltsevo.

As a result of the procedure, 74 Ukrainian prisoners who had been held in Donbass have been delivered to the Ukrainian side.

Daria Morozova, the Ombudsman of the Democratic People's Republic of Donetsk, told reporters that the republic delivered 73 Ukrainian POWs to Kiev, and one more person refused to return to his homeland.

In turn, Kiev has delivered 246 people to the two republics of Donetsk and Luhansk, representative of Ukraine Irina Gerashchenko said.