Saakashvili may eat another tie, this time for Ukraine

Ukrainian Prime Minister Vladimir Groysman commented on yesterday's act, when former Odessa region Governor and former President of Georgia Mikhail Saakashvili crossed the border between Poland and Ukraine on foot being unable to use any transport means to enter Ukraine.  According to Groysman, Saakashvili committed an "attack on Ukrainian statehood." 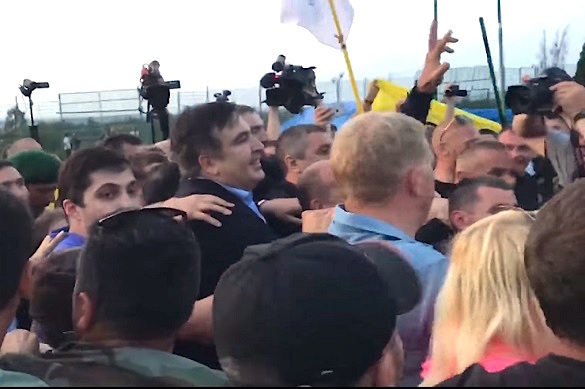 "The forceful breakthrough of the Ukrainian border is a crime, and those who are involved in the organisation of this act must be held accountable for it. This is the beginning of another attack against Ukrainian statehood," Groysman wrote on Facebook.

The President of Ukraine also spoke on the situation. Commenting on the illegal crossing of the Ukrainian state border by former Georgian President Mikhail Saakashvili, Petro Poroshenko expressed a hope that Saakashvili would be just as zealous to return to his homeland.

"I am convinced that this is a case for law enforcement agencies and they have started to act accordingly. Let's leave politics to politicians, crime to law enforcers, prosecutors and court ... I hope that this gentleman will have the same zeal to make his way to Georgia, as he tried to get to Ukraine," Poroshenko said.

Saakashvili, a disgraced politician, boarded an Intercity train in Poland to travel to Ukraine's Lvov, but the train was delayed "because of a passenger without a right to enter the territory of Ukraine."

Later, Saakashbili had a dinner with Mayor of Lvov, Andrey Sadovy.