A group of radical people in Kiev have torn off the EU flags from public institutions and trampled them. As they explained, Ukraine is not the EU colony. 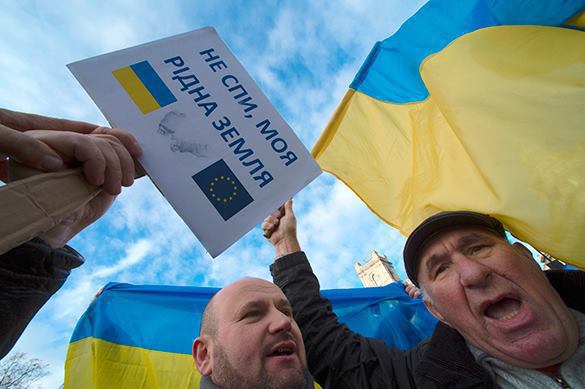 Activists believe that the EU treats Ukraine as a resource appendage and has left it without help during the most hard times. They are also discontent with the EU's condemnation of Donbass blockade and support of the Cabinet of Ministers' plan on integration of some Donetsk and Lugansk regions.

As Pravda.Ru reported, maximal rapprochement with the EU is a strategic policy of the current Kiev authorities. The Europeans though are not so enthusiastic. The visa-free regime has been suspended several times. Although the Ukrainian President Poroshenko swore that it would be provided until 24 November 2016.

Beside that, the free trade zone agreement turned out to be more beneficial for the EU rather than Ukraine. The export increase from the EU countries to Ukraine last year was ten times higher against the Ukrainian one.

Will US let Ukraine get away with IMF money?