Military equipment and armed fighters have been mustered to the Administration of the Ukrainian president. Witnesses release photos in social networks with armoured buses and special service fighters, who are being brought to Kiev to secure order during the expected protests. 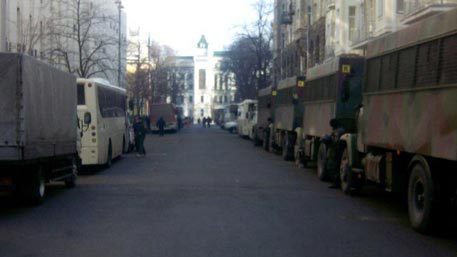 According to some data, on 19 February one policeman got seriously injured in course of clashes in the European place, five protestants were detained.

After a failed attempt to put up a tent near the president's Administration and brawls with police, activists who demand Petro Poroshenko to support blockade of uncontrolled territories, left the streets of Bankova and Instytutska.

The traffic is shut down in the city, there have been installed metal detectors, reinforced patrol is on duty in the streets of Khreshchatyk, Instytutska, and Bankova as well as in the Independence Square Maidan Nezalezhnosti.

It is known that large-scale protests are planned for today's evening, 20 February, by the Ukrainian radicals. One of their demands is to stop trading with the Donetsk and Lugansk People's Republics.