US provokes war between Russia and Europe, Colonel General says

The Americans redeploy a tank brigade from the US to the Eastern Europe, that is 4,000 military men and 250 tanks, as well as Bradley armoured fighting vehicles, self-propelled howitzers, and other 1,700 wheeled vehicles and lorries. 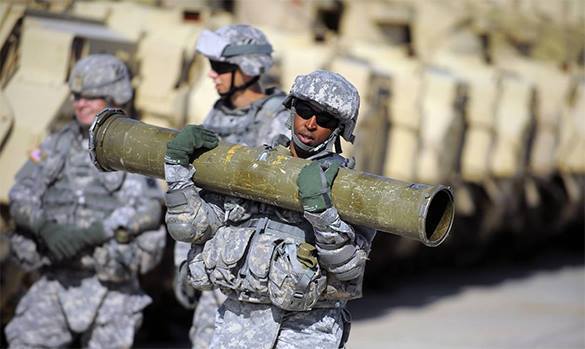 "The Americans regularly hone redeployment of strategic reserves in the Eastern Europe during the Baltops drills. Now they build-up scale. The US makes everything possible to provoke an armed conflict between Russia and Europe. After colliding Russia with Europe, the Americans will join in the second stage, allegedly rescuing their NATO fellows. The economic rival of the US is Europe, the geopolitical one is Russia," Leonid Ivashov told Pravda.Ru.

The current shift of tank brigade violates an agreement between the NATO and Russia of 1997 on the ban of considerable forces deployment at the Russian borders. "Now this agreement does not operate. The Americans did not care about it before, and today they care far less," the expert noted.

How will we respond? Russia is ready to provide a response with political and diplomatic means, as well as the military ones, Leonid Ivashov said.

The US Deputy Secretary of Defense Robert Work explained the necessity of the US armed forces deployment with the fact that the Eastern Europe countries doubt US readiness to defend them given rise of the Russian aggression.

"This readiness has never existed. Why doesn't the US defend Europe from the influx of terrorists, migrants, refugees? On the contrary, they provoke all these processes."

Countries of the Eastern Europe want NATO's help, but on the other side, they don't want to spend 2% of their budget on the NATO's maintenance. Will Washington be fed up with this parasitic attitude sometime?

"The NATO is not a security tool for the European nations. It's tool of aggression, advancement to the markets, especially hydrocarbon ones, of the American and transnational corporations.

The NATO participated in the annihilation of Yugoslavia. What did the Europeans get out of it? Nothing! Those were the Americans, the British who got something. But the main thing is that a big country was eliminated. The same is in Iraq. Who got the oil fields? Again these were the British and American companies.

By the way, when the NATO presents its doctrines, it always names four issues. The NATO is needed as an organization to defend its countries from terrorism, spread of weapons of mass destruction, to combat drug traffic and illegal migration. That's all lies. The NATO is not ready to combat it.

And why did these terror acts happen in France, and especially Belgium? One of the reasons is because national police is sure that the NATO is the main defender from terrorism. And they keep everything with the lies. It is still not clear who is behind these acts of terror. For whom is it profitable to hold Europe at bay? For the Americans," Leonid Ivashov concluded.