General Secretary of the Communist Party of Vietnam Nguyen Phu Trong began an official four-day visit to Japan on Tuesday (from September 15th-18th) at the invitation of Japan administration. 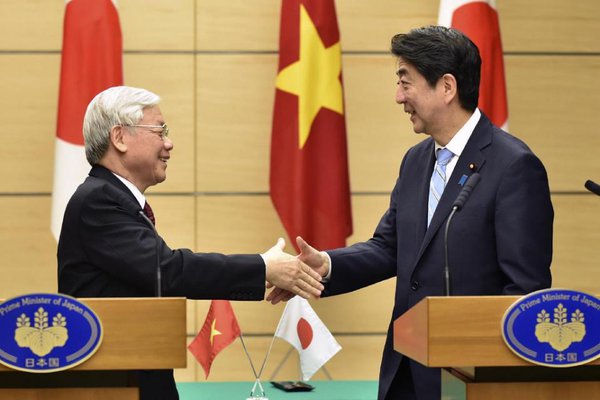 The two sides expressed serious concerns over recent developments on the South China Sea, including the massive land reclamation work and construction of outposts, which intensify tensions, damage trust and threaten peace and stability in the region and the world.

"It is very significant that we shared grave concerns over continuous unilateral actions to change the status quo and increase tensions in the South China Sea, which includes large-scale land reclamation and building of outposts," Japanese Prime Minister Shinzo Abe said in apparent reference to China's activities during a press conference.

Speaking at a joint news conference after their talks in Tokyo, the leaders agreed to strengthen security and defense cooperation by promoting exchanges and training, and also signed a memorandum of cooperation in United Nations-led peacekeeping operations.

Following a meeting with Nguyen Phu Trong, the General Secretary of the Communist Party of Vietnam, Japanese premier Shinzo Abe pledged that his country would provide new vessels in a boost security ties. The agreement to provide more used vessels follows Tokyo's pledge last year to provide Hanoi with six secondhand ships that could be used as patrol vessels.

As Tokyo and Hanoi cement their "extensive strategic partnership," the two countries agreed to cooperate in agriculture, a priority area for Vietnam. According to the statement, Vietnam will open its market to Japanese apples, while Vietnamese mangoes will enter the Japanese market soon.

"Our country will provide about 100 billion yen in loans mainly for infrastructure building projects such as ports and harbors, and highway development. These measures will greatly push Vietnam's growth," Abe said at a joint press conference. Abe's new pledges are certainly a boost to the overall bilateral relationship. It would be a crucial milestone, opening up a new vision for the two sides' relations in the near future.