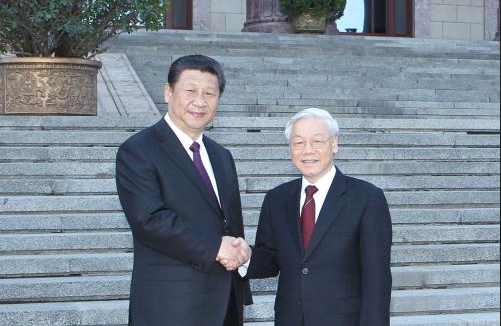 In a friendly and candid atmosphere, the two sides informed one another of the situations in their respective Parties and countries, discussed issues in-depth and reached broad common perceptions on the orientation and major measures to intensify ties between the two Parties and countries.

Concluding the visit, they issued the Vietnam-China joint communiqué affirming the outcomes of the visit and key perceptions reached between Party and State leaders in order to further develop the Vietnam-China neighbourly friendship and comprehensive strategic cooperative partnership in a healthy, stable and sustainable fashion for the sake of the two peoples and for peace, stability and prosperity in the region and the world.

Vietnam and China mark 65 years of diplomatic ties in 2015, an important occasion to promote their traditional friendship and comprehensive strategic cooperative partnership. Vietnam always considers China an important neighbor and partner. Despite regional and global fluctuations and differences over a number of issues, Vietnam always deems it important to develop its comprehensive strategic cooperative partnership with China and hopes China will consider Vietnam's stability, development, and prosperity an opportunity for itself.

High-level visits and contacts will be the focal point this year with the purpose of keeping Vietnam-China relations on the right track of stable and transparent growth. Vietnamese ambassador to China Nguyen Van Tho said that early this year Party General Secretary Nguyen Phu Trong and Chinese Party General Secretary and President Xi Jinping held a telephone conversation about plans to boost bilateral ties.

The year 2015 is considered an important year for Vietnam's international integration. In addition to making the most of the benefits of bilateral trade agreements, promoting cooperation with key partners will help Vietnam achieve its economic development targets and raise its international status.