North Korea vows to nuke 'aggressive forces of US imperialism' 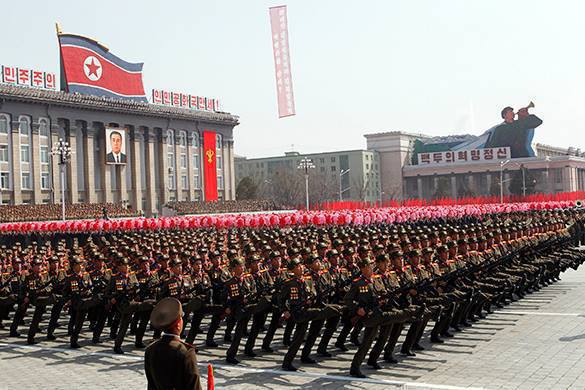 The North Korean leader promised during military drills to destroy aircraft carriers of "aggressive forces of US imperialism" that his country was ready for a nuclear war against the United States.

Pyongyang said that if the USA does not stop its "aggression," the Democratic People's Republic of North Korea would use nuclear weapons, cyber attacks, as well as unique methods of warfare against the USA. North Korea would thus conduct an unprecedented war in the history of mankind, Pyongyang officials said.

North Korea is no longer willing to negotiate with the United States. The country intends to respond to Washington's "ferocious" policy.

"Since the gangster-like U.S. imperialists are blaring that they will 'bring down' the DPRK (North Korea) . . . the army and people of the DPRK cannot but officially notify the Obama administration . . . that the DPRK has neither need nor willingness to sit at negotiating table with the U.S. any longer," a message from the National Defense committee of DPRK said.

The army and the people of North Korea will take responsive actions to break the USA to atoms, the statement from the department also saidю The country can no longer tolerate the efforts that the United States takes to "eradicate ideology" and "destroy the social system" of North Korea.

"(Smaller), precision and diversified nuclear striking means and ground, naval, underwater, air and cyber warfare means will be used," the commission said in the statement carried by the official KCNA news agency.