On Wednesday night, Jan 14th, during a drug-related police raid in Rahat (the Arab-Bedouin city in the Negev), a policeman shot and killed a young man that was not involved, and was standing in his own yard. 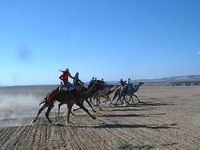 The father was taken away from his dying son and to an "interrogation" where, handcuffed on hands and ankles, he was beaten.

The funeral was yesterday. The police and the municipality of Rahat agreed to allow the funeral to proceed without any police present. Despite this an armored police car forced its way through two road blocks and into the street of the funeral. This created unrest, and a representative of the municipality approached and requested that the police follow him out of the 30,000 people crowd of funeral goers. The police responded that they have sufficient bullets for everyone present and refused. Instead, the police started to crash into the parked cars. In the very violent events that followed the police killed another man, resident of Rahat, and many were injured by rubber bullets: among them a man lost his eye, and another his jaw.