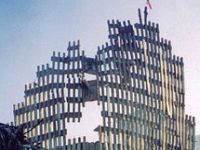 The MI5 director-general mentioned mass shooting events such as the Mumbai attack or aviation bomb plots and identified as the probable perpetrator the Khorasan Cell, veteran terrorists sent to Syria by Al-Qaeda leader Ayman al-Zawahiri. The cell is said to work in tandem with the al-Nusra Front in Syria.

The declarations were made as Andrew Parker addressed the Royal United Services Institute (RUSI) at MI5 headquarters Thames House. Parker stated that Khorasan has around 50 members and their aim is to test explosive devices in Syria, recruit western jihadis and then to plan attacks on western targets.