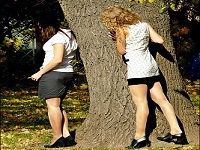 Municipal authorities of the Danish capital introduced the system of anonymous denunciation. Officials with the municipality of Copenhagen say that the initiative received a positive response from the population of the Danish capital, including 81 percent of trade unions. In addition, the system has already demonstrated its effectiveness, reports RT.

A representative of the municipality of Copenhagen said that the introduction of the system was viewed as an achievement, as it provided an information channel for the authorities, though which they will be able to obtain the information that they could not receive wit реру use of other methods before, to regulate existent problems.

During the last two years, local citizens were encouraged to report any suspicious activity to the city mayor's office. During this time, the authorities have received 84 messages. Two-thirds of them were related to illegal activities or serious violations of the law, TASS reports.