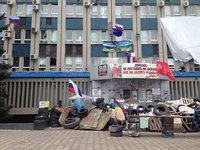 The Ukrainian service for veterinary and sanitary control banned the imports of products from the territories that came out of the control of the current government and the army - the Donetsk and Luhansk self-proclaimed republics. The department has suspended the work of its offices in these regions.

"The heads of territorial bodies of the service were instructed to ensure state veterinary and sanitary control for the movement of cargoes subject to the service of veterinary medicine of Ukraine, to exclude the transportation of cargoes from the territories, where the activity of the adequate service was suspended," the press service of the above-mentioned agency said.

Plotnitsky is certain that the official government of Ukraine has already recognized the independence of the two republics. "Let them just say in a normal human language that they recognize us. In fact, they already do, since they just agree to give the laws that will not work on the territory of Ukraine," he said.