The Mirror of the Week publication, citing sources, said that the "Popular Front" party of Ukrainian Prime Minister Yatsenyuk and "The Block of Petro Poroshenko" failed to agree on the single list for early parliamentary elections in Ukraine, scheduled for October 26. 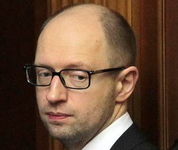 The sides tried to negotiate last night, but the talks failed. "The appetites of the two parties were incompatible," said the source.

Yatsenyuk, as a condition for joint participation of two political forces in the election demanded the top place of the list, a third in the passable part of the list and a change in the name of the block. Yatsenyuk also demanded he should keep the prime minister post before the first term of President Poroshenko ends. He also said that Alexander Turchynov  should retain the position of the speaker in the Verkhovna Rada of the next convocation.

The only agreement that the sides have managed to accept was the fact that "The Block of Petro Poroshenko" would not nominate its candidates in ten majority districts out of 225, not to compete with nominees from Yatsenyuk's "Popular Front", ITAR-TASS reports.