Jen Psaki blames militia for appearance of refugees in Russia 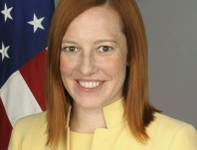 U.S. State Department spokeswoman Jen Psaki accused the militia fighting in Luhansk and Donetsk regions of the emergence of refugees from Ukraine to Russia.

"It is clear that there is a significant movement of people caused by violence in eastern Ukraine", Psaki said. At the same time, according to Psaki, refugees blame militia for their situation.

The vast number of people, who reported from the field, said that the separatists, whom Russia supported, not only participated in violence and capture of buildings and attacks on people and innocent civilians. They have no right to do this in a sovereign country like Ukraine," Psaki said, according to RIA Novosti.

Psaki, along with her deputy Harf cast doubt on the UN data about 110,000 refugees. She reminded that most of the Ukrainians, who came to Russia, did not apply for that status.