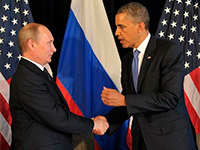 The White House denied reports of the termination of contacts between the Russian Federation and the United States and said that interaction between high-level officials of the countries continued.

Putin's spokesman Dmitry Peskov said that "the dialogue continues. Last week, there was a conversation between the two presidents. Now there are a lot of differences, so the dialogues can be very tough, but nevertheless, communication continues."